,,Afghanistan has many traditions which are totally erroneous, that give clearance families to marry their daughters at young ages without their acceptance and consent because of this shocking I would like to express my feeling by showing SONITA in KINO ASYL.

For example, there is a tradition in some provinces that lets families engage two children even before their birth. Called “Naami kardan” in Dari, it means to promise the girl to someone. In some places, families sell their daughters to another family for bride prices ranging from one and upto three million Afghani. Families also exchange their young daughters for sons. In Afghanistan a girl is trained to do house chores, being obedient, and is kept a virgin, and can be sold or traded without her consent. She is obliged to leave behind everything: her childhood, her friends, her family, her education.

These young brides miss out on education because once Afghan girls are married the laws don’t allow them to continue school with the unmarried girls. I believe girls should be allowed to marry when they have finished their higher education and can stand on their own feet. Then they can educate their own children to become productive members of society, while continuing their lifetimes as they want.

In Afghanistan, according to United Nations and UNICEF statistics, more than 57 percent of Afghan brides are under the age of sixteen, and the mortality rate for women dying in childbirth is very high: 18 percent.” 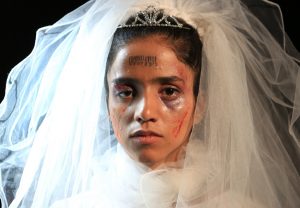 Sonita is an 18 year old girl from Afghanistan, who lives in Iran illegally. It’s her dream to become a famous rapper, to escape her family’s plan to sell her to a husband, who is a complete stranger. The Iranian director Rokhsareh Ghaem Maghami accompanied Sonita Alizadeh for three years to document her story.